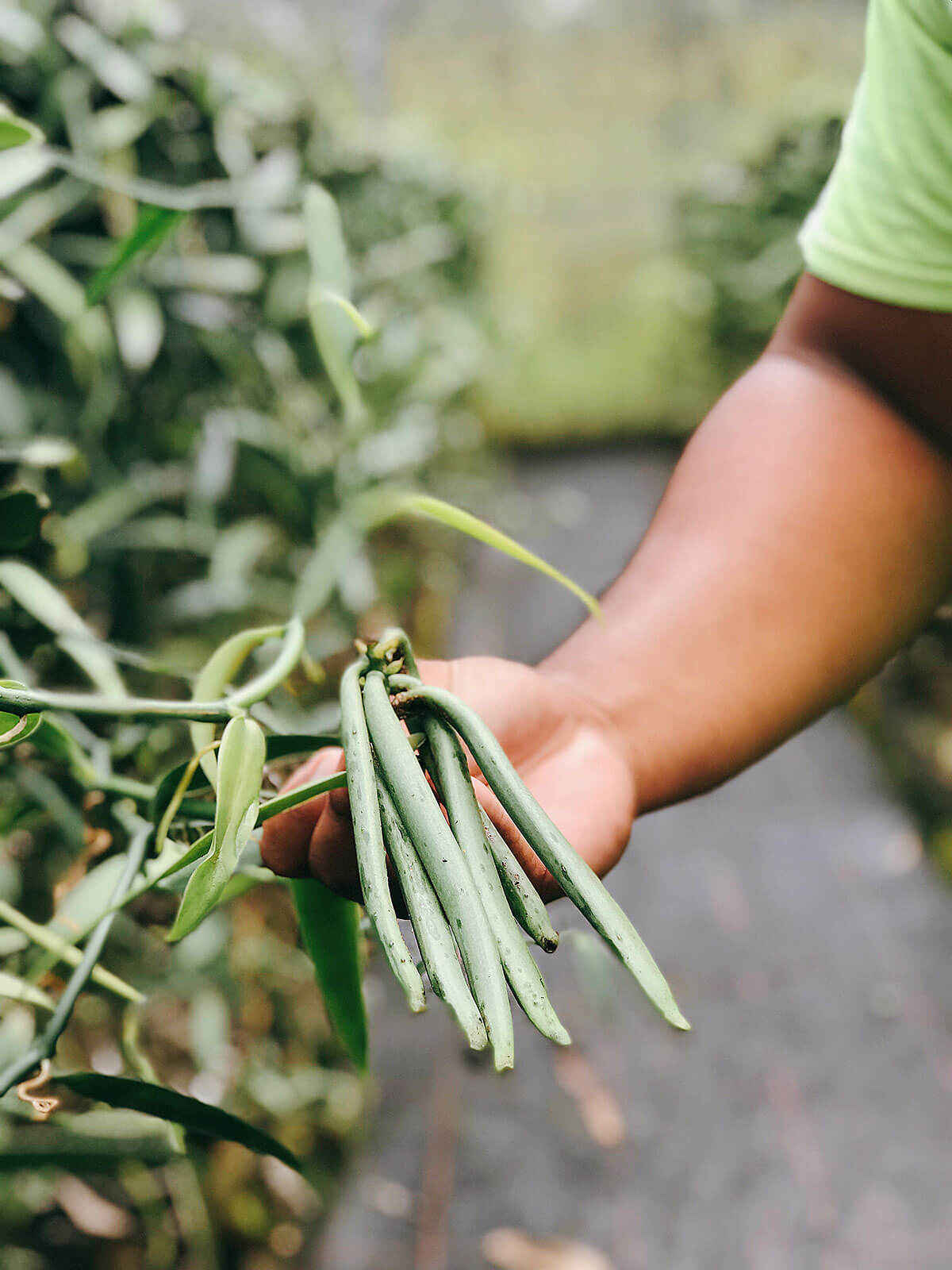 Green Tahitian vanilla pods on the island of Taha’a

Why is Tahitian vanilla the best in the world and how is it produced? I was recently in French Polynesia where vanilla is used liberally in everything from desserts and cocktails to savoury dishes and room fresheners. Even though the temptation to sit around and stare at the incredible blue water was very strong, I insisted on visiting a vanilla plantation. And I just happened to be spending a few days on Taha’a, the “vanilla island”. Tahitian vanilla is world-renowned for its delicate aroma and floral flavour used in baking and perfume making. Taha’a produces 80% of French Polynesia’s famous spice, whose aroma wafts through the forests and hilltops of the small South Pacific island. 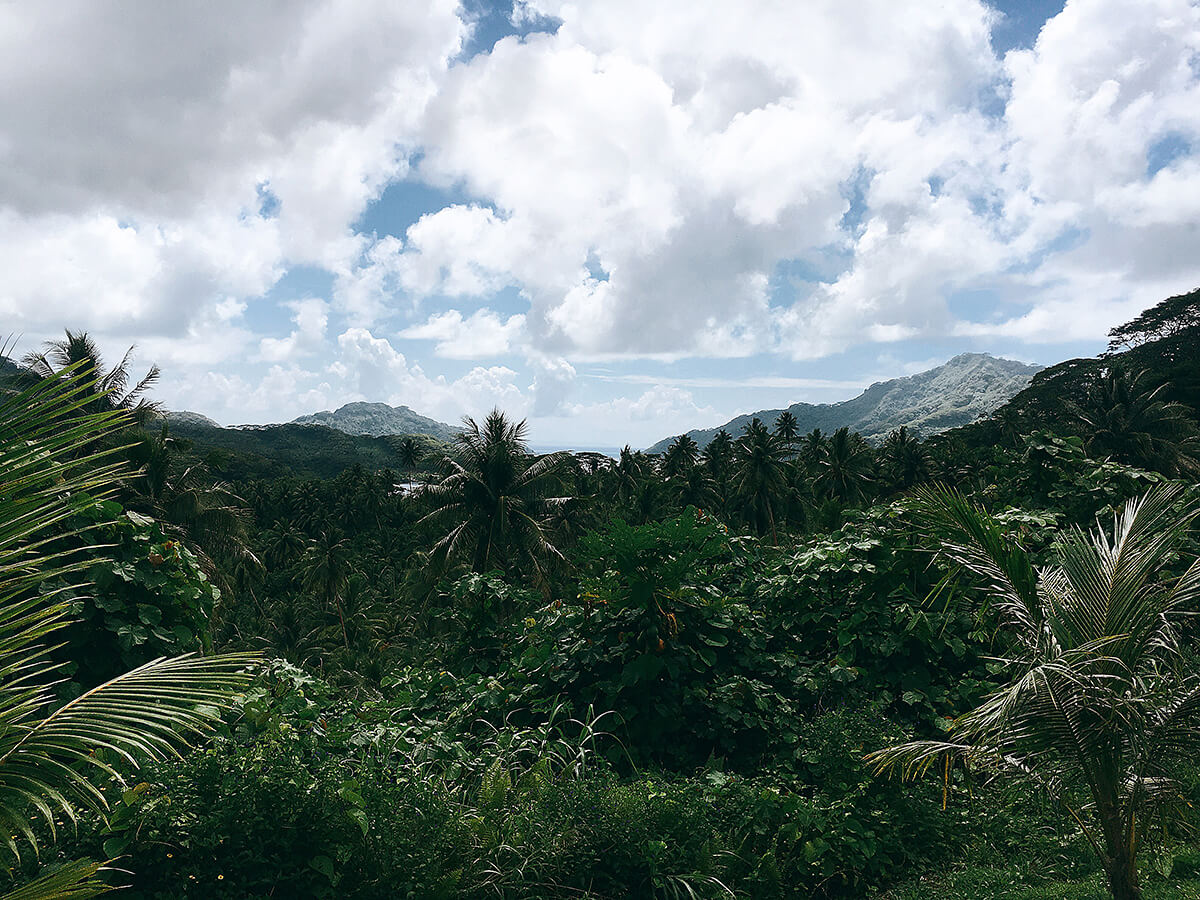 The beautifully lush island of Taha’a

There is no airport on Taha’a and the only way to reach it is by boat. Upon approaching the tiny tropical island, one would never suspect that such an idyllic place holds the secret to what is arguably the best vanilla in the world. Taha’a belongs to French Polynesia’s Society group of islands and is still somewhat wild and secluded compared to its more touristy counterparts such as Bora Bora, for instance. This flower-shaped island is surrounded by several motus (islands) scattered around its coral reef and enclosing a gorgeous lagoon painted in different shades of blues and greens. 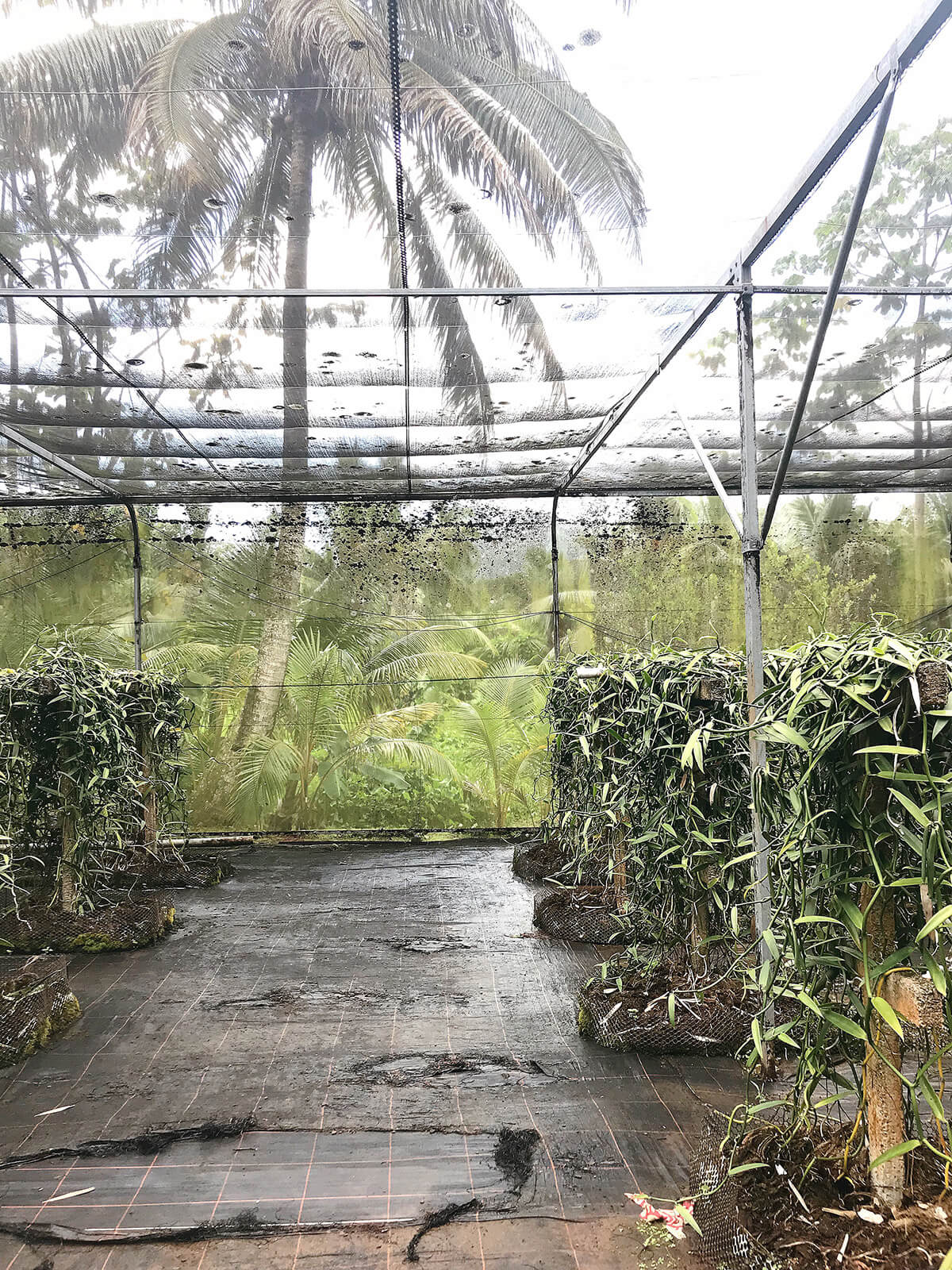 A Tahitian vanilla plantation on the island of Taha’a

Taha’a’s wet climate and altitude are perfectly suited for growing several crops, the most famous of which is the vanilla orchid, which was introduced to Tahiti in 1848. Most of Taha’s’s vanilla plantations are artisanal and family-owned. They are hardly noticeable if one doesn’t know what to look for, as I didn’t at first. It took me a while to click that the green plants shrouded in nets (to protect them from birds and insects) were indeed vanilla orchids. Each of these plantations holds several climbing plants wrapped around posts and lined up in perfect rows. 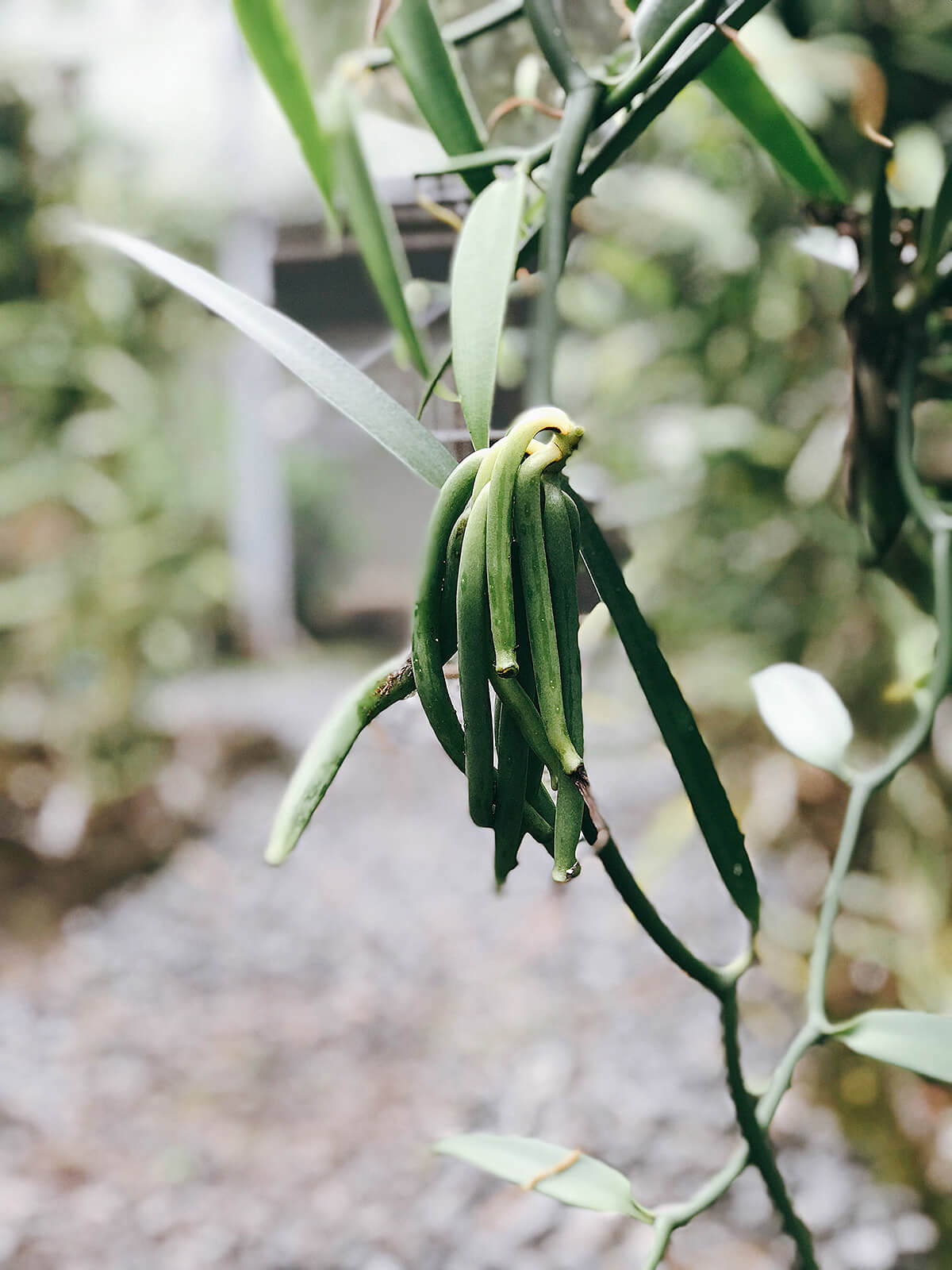 Vanilla production is a long and painstaking process that demands experience and a vigilant presence. Taha’a’s producers have become experts at growing this most delicate spice. The Tahitian vanilla orchid is a hybrid of the Mexico and Madagascar plants and French Polynesia doesn’t have the required insects to pollinate the plants so this part has to be done by humans. So vanilla production starts with the hand pollination of every flower at just the right time within a 24-hour window before the buds wither and fall. Can you imagine the pressure? It then takes about a year of production to go from flower to bean.

However precise it may seem, the pollination is not even the hardest part of the production. The most meticulous, labour-intensive part of the process starts once the beans have been picked. The pods are spread on a piece of fabric and left to dry in the Tahitian sun for no more than 2 hours a day after which they are wrapped back in the fabric and brought inside to be placed in sealed containers. After about 2 months of this process, each bean gets hand kneaded in order to straighten the malleable pods and “release” the tiny vanilla seeds inside, which are trapped in a papery skin. It takes 3 months of this daily sun exposure for the vanilla beans to be ready for consumption. 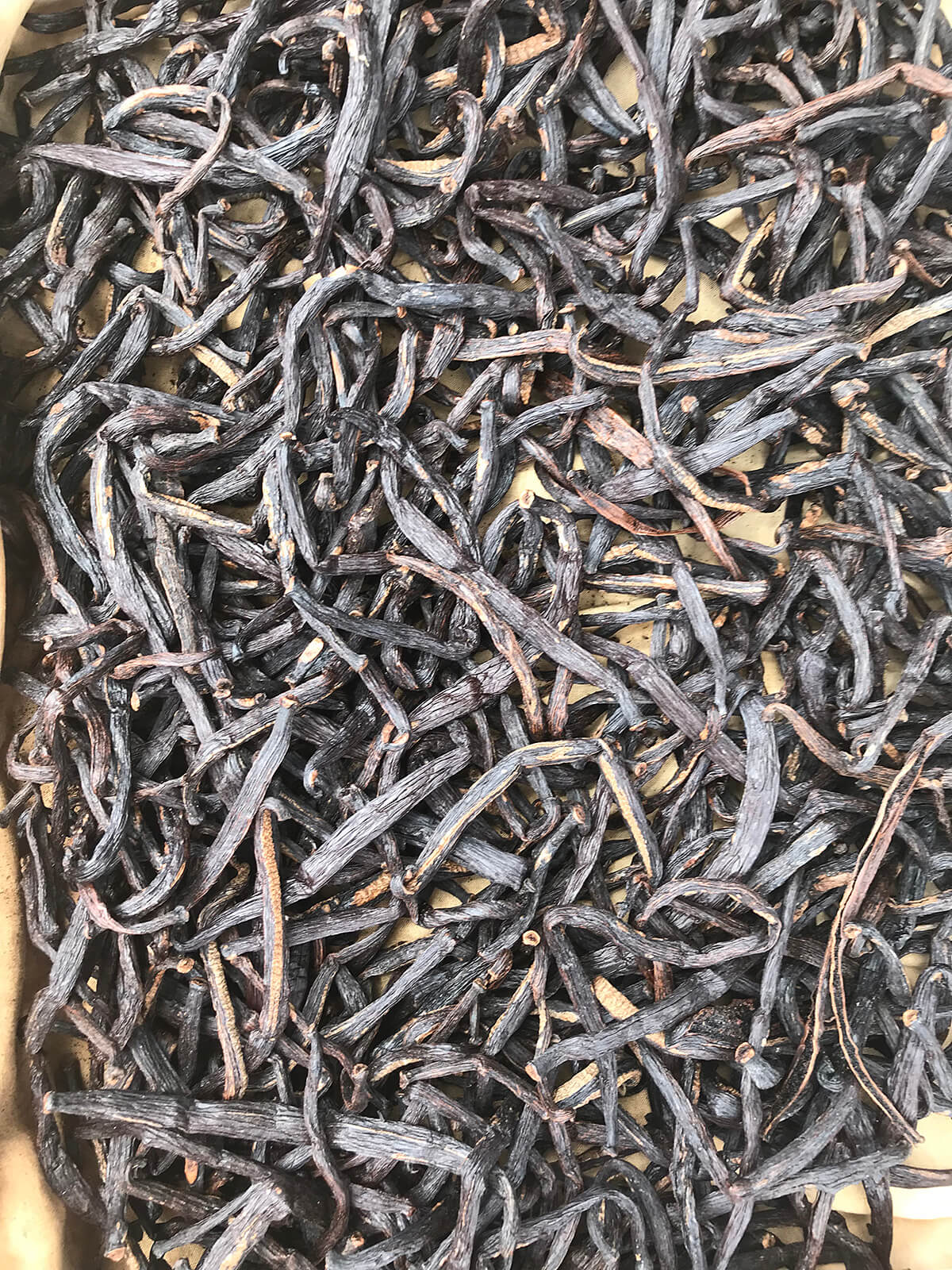 The dried pods are then sorted into 3 separate categories. The larger ones fall under category A and are sold individually while the smaller ones are categorized as B and C and sold by weight. The quality of the vanilla doesn’t differ in all 3 categories. For every kilo of dried vanilla pods, or “black gold” as its often referred to, it takes about 3 kilos of fresh vanilla bean and a whole lot of human labor. Knowing the entire production process makes it easier to understand why vanilla is the second priciest spice in the world (after saffron). If you ever make it to Taha’a, I encourage you to buy some vanilla beans while you’re there. They are pricey but much more affordable than what you can find anywhere else on the planet. 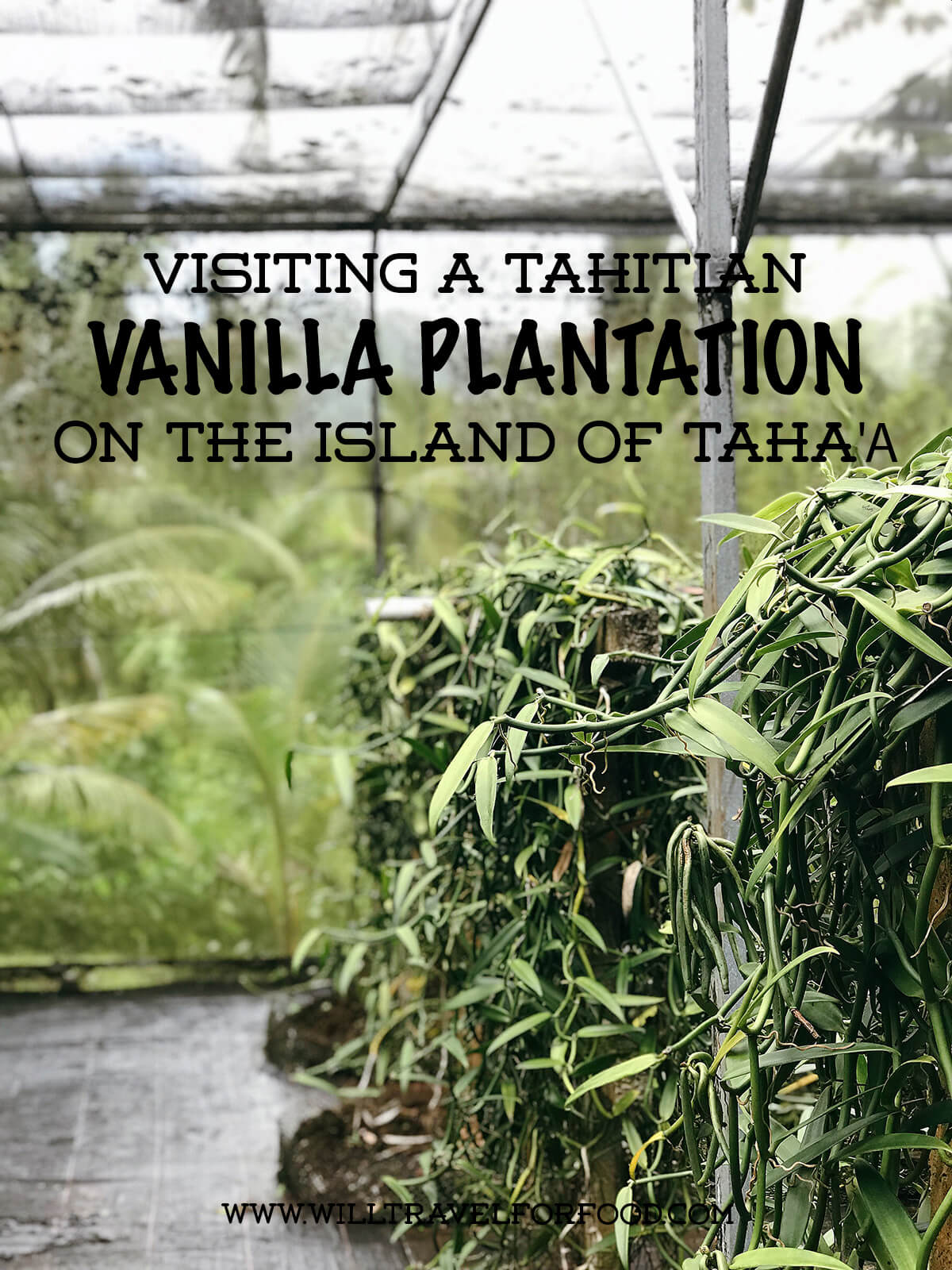 {{ PIN IT }} Find out how precious vanilla is produced