48 hours in Zürich – Day 1: The Old Town and celebrating Sechseläuten 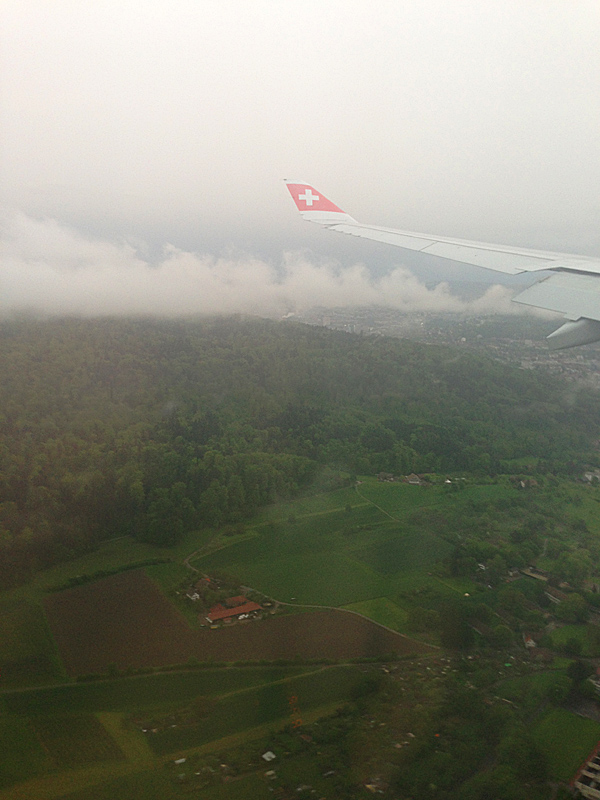 The wing of our SWISS plane flying over green Switzerland

If you follow me on Twitter or Instagram, you probably noticed that I recently spent a couple of days in Zürich, Switzerland. I and four other bloggers (Eve, Marie-Julie, Pierre-Luc and Carrie) were invited by the airline company SWISS to catch a ride with them to Zürich. We were to go on a discovery of the planes, flight and food service and lounges that SWISS offers as well as some of Zürich’s best spots. Our trip was only 48-hours but we packed so much in those two days that I feel like I stayed much longer than that although, I will go back one day since I really fell under the charm of Zürich.

The trip started with us boarding the SWISS flight before everyone else and going on a tour of the empty plane and swish business and first class areas. We were flying out in economy but coming back in business and this was a sneak peak at the luxurious beyond-the-curtain seats. Not only is SWISS reputed for the quality of its service – which I can attest to – but it has now become the world’s first certified “allergy-friendly” airline. It started introducing products – food, drinks and cabin interiors – that are specifically designed to enhance the air travel experience for allergy sufferers. We were off to a great start bubbly glass in hand! 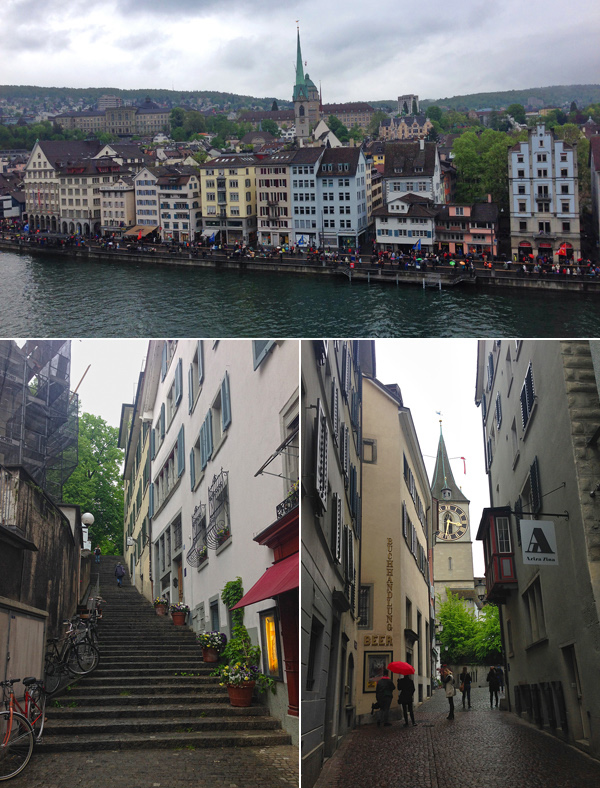 Upon arrival at the Zürich airport, we were whisked to the SWISS arrival lounge for a visit and a breakfast. We could have had a shower, a snooze and a pressed suit if we chose to, all great services offered by SWISS to its Business and First class clients arriving early in Zürich. There are big bathrooms with showers and luxurious and cozy bedrooms for those who want to freshen up and rest. Relaxation areas, a business lounge and a great breakfast buffet are also on offer. We sampled some of the offering before heading out to the train station which led us to the heart of Old Town and Rutli Hotel, our home for the next two days. 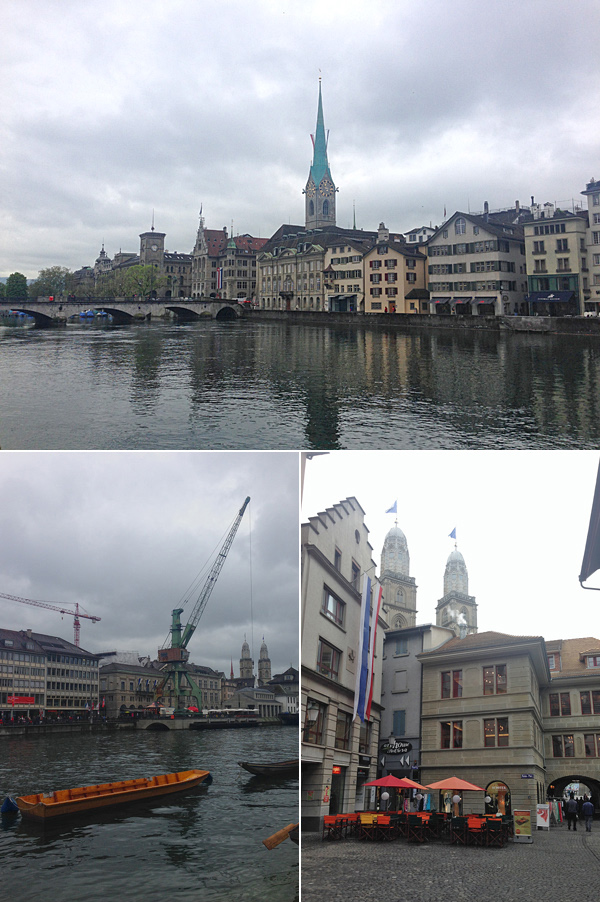 I had been to Zürich once before for a few hours on a layover years ago but I don’t remember much. It was cold and I was tired from my overnight flight so the city left no impression on me whatsoever. I am so glad to have gone back because it is an absolutely charming town! Sophisticated, worldly and sweet (as in, chocolate sweet!), Zürich made me feel constantly underdressed since everyone else seemed so chic and well put together. The stores, the streets, the boutiques, the tram, the chocolates and every Swiss cliché you can think of is elegant, sophisticated and well-designed. The town itself is very accessible. You can easily walk everywhere, especially around the Old Town, where all the building are old yet seem new because of how well kept they are. The tram system is also very easy to master. Get yourself a ZürichCard which has many privileges like unlimited access to “tram, bus, rail, boat and cable car throughout the city of Zürich and its surrounding area, free entrance to most of Zürich’s museums, a discount at selected Zürich shops, a culinary surprise at selected Zürich restaurants and other discounts.” 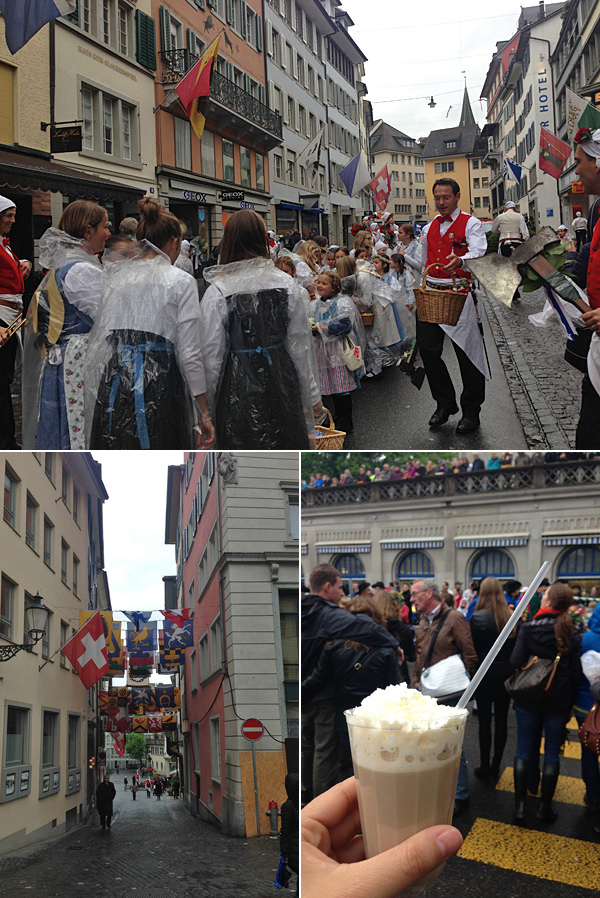 Sechselaüten in Zürich, decorated streets, costumed children and an Amaretto coffee while watching the parade

We spent the afternoon walking around charming Old Town and its cute cobblestone streets. We visited Fraumünster, a church definitely worth the visit to admire the stained glass windows by Giacometti and Chagall. We also went all the way up to Lindenhof to admire the view of the Limmat river below and the beautiful buildings that line up both sides of it. Lake Zürich and the imposing neo-gothic twin towers of Grossmünster church are also visible from up there. The whole city was in a festive mood and the streets decorated for a special holiday. It just so happened that our trip coincided with the Sechseläuten, a traditional festival that’s been around since the 1900s and meant to celebrate the arrival of spring with a huge parade of the city’s 25 Guilds, their costumed male members, horses, carriages and flags. It’s a day off in Zürich only (not in the rest of Switzerland) and it is worthy to note that everything is closed and everyone is out on the streets grog, beer or bretzel in hand, cheering on the paraders and handing flowers to those marching. Each guild contributes its own quirks, with one of the funnier ones including throwing dead fish at the crowd. The parade then culminates at Sechseläutenplatz with the burning at the stake of a huge “böögg” (snowman) representing winter. If the böögg burns quickly and explodes (its head is filled with explosives!), then the following summer will be long and warm. I say we start a similar tradition in Montreal; how nice would it feel to burn winter at the stake? We followed the parade until the end and then waited for 6pm (the time the böögg is lit) at club Mascotte across the street. It’s the oldest club in Zürich and they were throwing a party with plenty of bubbly, cheese and charcuteries to celebrate the day. I am happy to announce that summer in Zürich will be long and hot since the böögg exploded fairly quickly this year.

Stay tuned for my chocolate and pastry-filled second day in Zürich coming soon!

Many thanks to SWISS for inviting me to join the other bloggers on this short trip to Zürich, to Kilicom for organizing this trip and to Swiss Tourism, Zürich Tourism and Rutli Hotel for the accommodation and warm welcome. My flight, hotel room and certain meals were covered by the previously cited organizations as part of this organized press trip. SWISS has direct flights to Zürich from Montreal, Toronto and other major Canadian Cities.

For more photos of my trip, visit my Facebook album here. Also check out my Google map of Zürich with a lot more spots noted on it. It’s a great travel tool.