Help someone become a Montrealer for a year! 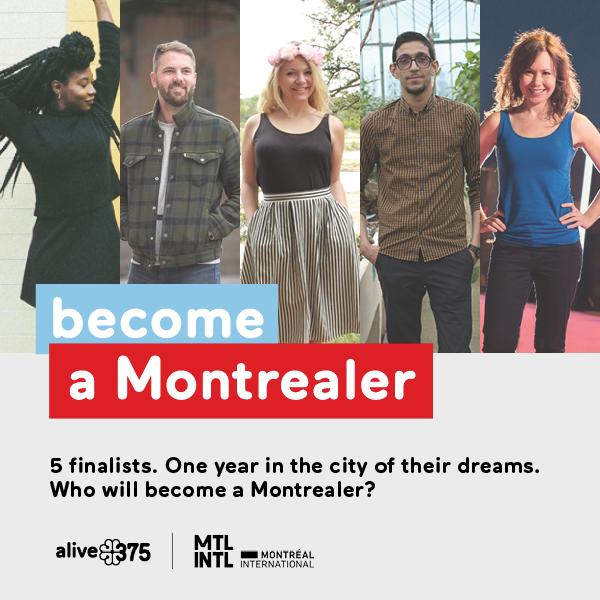 Will it be Ben, Philippe, Laëtitia, Pauline or Allison? Vote for your favourite now.

I became a Montrealer when I moved here from Lebanon in December 1991. It was -40 degrees and I didn’t step outside for the first 3 days. I was glued to the Weather Network and couldn’t believe it was that cold out! It’s been 25 years now and I’ve never looked back. I still hate winter (who doesn’t!) but I am now equipped to go out in the cold and I never let a little snow stop me. I also poke fun at this who declare their country cold at anything less that -20. I adopted Montreal as my new home but the city also welcomed me and allowed me to create a life as a student first, then eventually, after a couple of different careers, as the food and travel blogger that you know today. I am forever grateful to be living in this small, big town, halfway between Europe and America, that I consider home, despite my perpetual wanderlust.

No one parties like Montreal does and I have been an active participant in its celebrations for the past 25 years. Since becoming a blogger, I have also made it my mission to promote the city and its many wonders whenever I can, through my writings but also when I meet people while travelling. Montreal will be celebrating its 375th anniversary next year so get ready to celebrate like you’ve never celebrated before! The programming is still in the works but promises to be fabulous!

Who will become a Montrealer?

For this grand occasion, Montreal is inviting someone to live the dream and become a Montrealer for a year! How cool is that? The talent search drew 124 applicants from 20 countries around the world but it’s now all down to five finalists who are competing to become an ambassador for Montreal during its 375th anniversary celebrations. Watch their video presentations and vote for your favourite candidate right. Will it be Ben, Philippe, Laëtitia, Pauline or Allison? The fate of the lucky winner is in your hands 🙂

Head to becomeamontreal.com and vote now! Votes close on May 15th, 2016. Good luck to the 5 finalists!

This article was written in partnership with the society for the celebration of Montreal’s 375th anniversary but all opinions, as usual, are mine.

My favourite Greek restaurants in Montreal