Lebanese cuisine with a twist: 3 restaurants to try in Lebanon + a recipe for fatteh I spent a couple of weeks in Lebanon this past holiday season. If you love eating, Lebanon should definitely be on your travel list. My people know how to eat! We are obsessed with food. We talk about the next meal while eating and nothing is ever planned unless it’s around food. I hadn’t been to Lebanon in 4 years and all I wanted to do was to spend time with loved ones and try a few new restaurants. I wanted to get my fill of Lebanese cuisine, both traditional and non. I was very impressed with the following three very different restaurants that serve traditional Lebanese food but with a little twist added. Next time you find yourself in Lebanon, give these a try and don’t forget to bring a substantial appetite with, Lebanese food is not for amateurs. 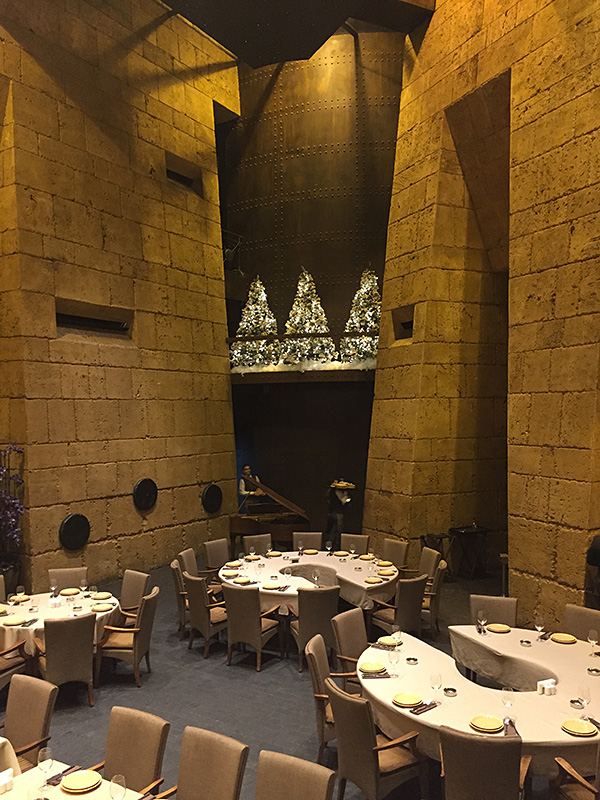 The massive walls of Babel restaurant in Dbayeh, Lebanon 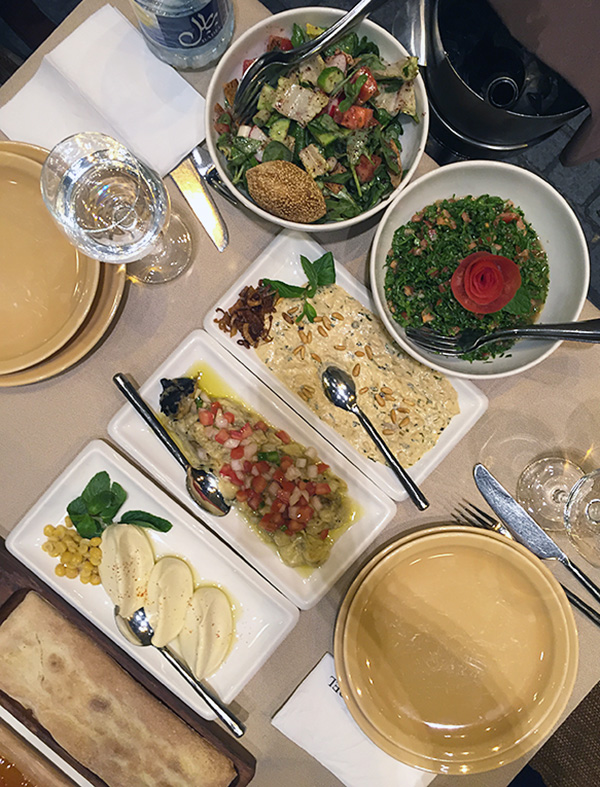 A generous spread of cold mezzes at Babel restaurant in Lebanon

It’s not until I sat down and looked around that I realized that the grandiose architecture at Babel makes it seem as if you’re having dinner in an ancient Egyptian temple. That’s when you realize that you are indeed having dinner in the “Tower of Babylone” but unlike that ancient cacophonous myth, this Babel is quite coherent. The menu is quite extensive and we definitely bit off more than we could chew when we ordered the tasting menu, which you should only order if there are 6 of you and you haven’t eaten in 2 days. You will find some of the usual suspects–homes, fattoush, etc.–on the menu as well as some items you’ve probably never heard of. According to our waiter, all the dishes are variations of regional Lebanese specialties. The presentation is far from being traditional and will keep you guessing about certain familiar items presented in an unfamiliar way. The fattoush, hommos, raheb salad (eggplant, tomatoes, onions), chicken liver, makaneks (sausages), chich taouk wrapped in philo, shanklish (dried cheese with onions and tomatoes) are all excellent choices but whatever you do, don’t skip on the excellent eggplant and kebab fatteh. Everything is accompanied by puffed and warm pita bread baked on the premises. 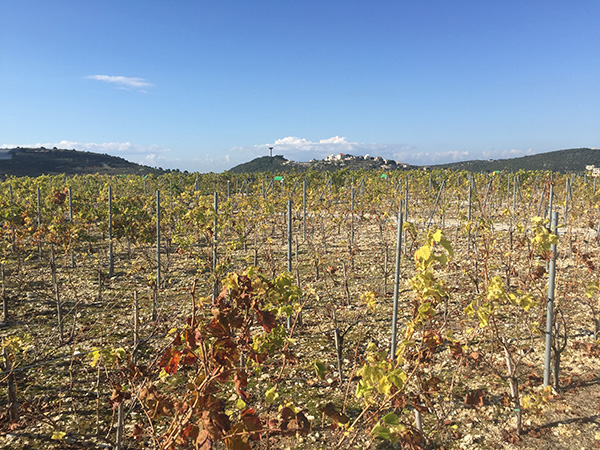 The vines and the view from the Ixsir wine estate in Batroun, Lebanon 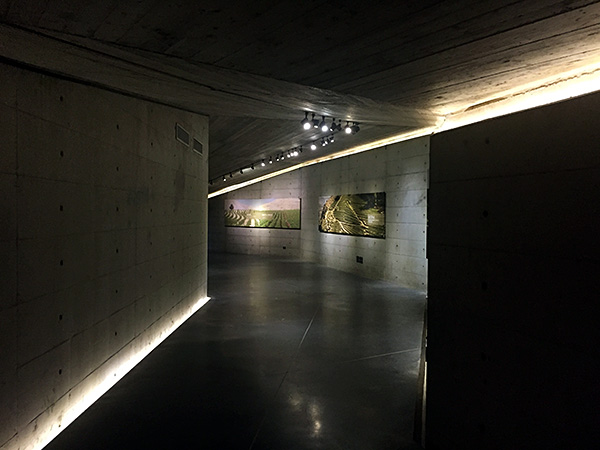 The winning contemporary architecture of the Ixsir wine making facilities

Wherever I travel, I always somehow find myself in the middle of a vineyard and my trip to Lebanon was no different. The Ixsir vineyards in Batroun are beautiful, if a little wilted when I visited in December. Located 60 kms from Beirut near the coastal town of Batroun, the 17th century estate was lovingly restored. A visit to the award-winning contemporary wine making facilities which were dug out and added underground is an absolute must since the architecture is just astonishing. The menu by Nicolas Audi is short yet creative and well balanced. It’s rooted in tradition but adds a fun twist by combining two traditional dishes or varying the cooking technique. The dishes are small and meant to be shared. I highly recommend the fatteh-style arayess, which basically combine mini kafta arayess (minced meat mixed with spices and cooked inside a pita bread) with fatteh-style yogurt. An absolute delight! I also highly enjoyed the spiced fries and the kebbé with mhammara (a spicy, red pepper and walnut spread). The dessert (photo below) was a delightfully refreshing and playful dish which combined ice cream with Persian fairy floss, a nostalgia-inducing childhood treat of mine. And of course, don’t forget to pair your meal with a bottle of Ixsir wine! 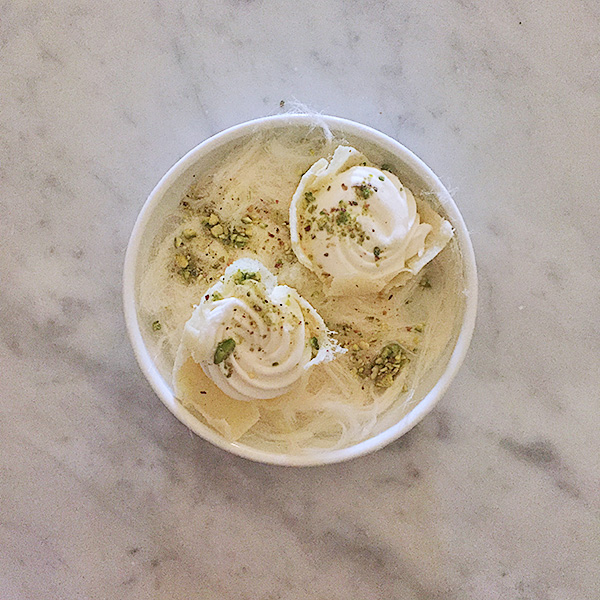 Divine white on white dessert at Ixsir: ashta ice cream on a bed of fairy floss 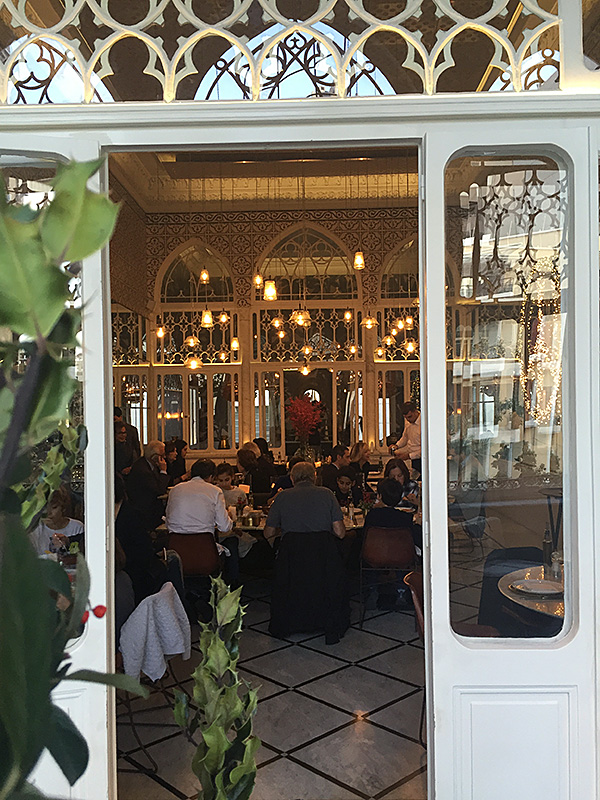 The breathtaking architecture of Liza restaurant in Beirut 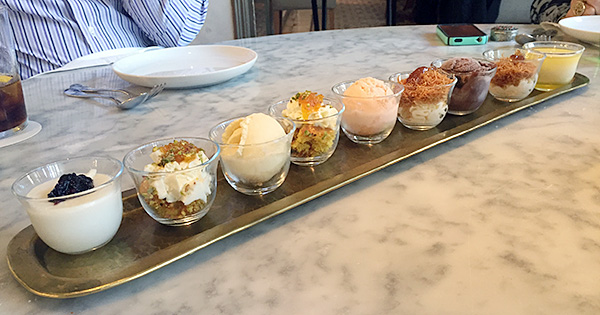 Beirut is sadly losing some of its traditional houses that are being replaced with modern buildings so I was doubly impressed by this absolutely gorgeous space! Open since 2013 and located in a beautifully renovated 19th-century palace in the heart of Achrafieh, Liza Beirut is not the first location for this unique restaurant, which was first established in Paris in 2005. Owners Liza Soughayar and Ziad Asseily worked with Maria Ousseimi and a plethora of Lebanese designers to bring this space back to its heyday splendour. And what a great job they did! The original layout of the light-filled space is kept intact while each one of the dining rooms and front bar are uniquely designed. Arabesque patterns, high ceilings, graceful window embellishments, bold custom made wallpapers, delicate lighting fixtures and huge mirrors to reflect all these twinkling intricate patterns all contribute in creating stunning  surroundings. The cuisine is reflective of the overall concept of modernizing without losing touch with tradition. I had the pleasure of sampling a delicious lamb and eggplant fatteh with the added subtle flavour of tomato sauce and fresh basil leaves, both non traditional ingredients in this very traditional dish. 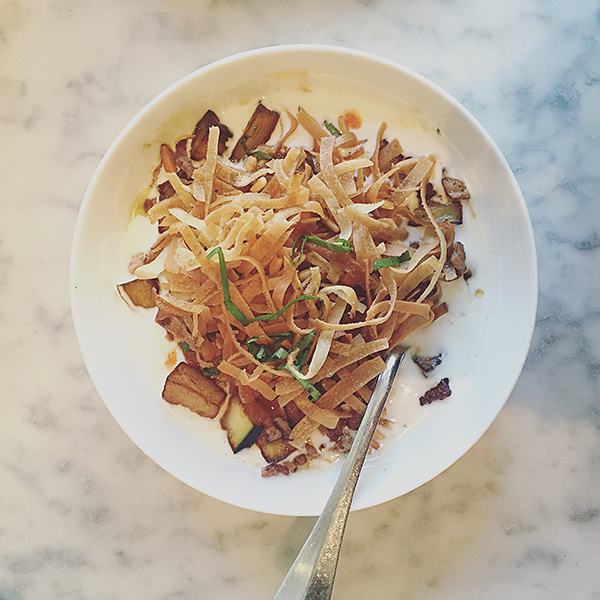 Eggplant and lamb fatteh at Liza restaurant in Beirut

What these 3 restaurants have in common–other than delectable food–is variations on my favourite dish: fatteh. This typical Levantine dish is often eaten for breakfast in Lebanon and has many regional variations. It’s basically a layered dish that contains eggplants, chickpeas, lamb or chicken (or any combination of those ingredients), fried or grilled pita bread, garlic yogurt (which is sometimes mixed with a touch of tahini) and nuts toasted in butter (pine nuts and/or almonds). It’s often but not always sprinkled with olive oil, parsley, fresh mint and/or ground cumin. It’s eaten at room temperature (or colder) and makes a great summer dish.

I’m participating in the Funnelogy Channel Culinary Travel Week by contributing a recipe inspired from my travel and I can’t think of a better inspiration than the time I spent in Lebanon recently. So here’s a recipe for a chickpea fatteh taken from Anissa Helou‘s Lebanese Cuisine, my go-to cookbook for any Lebanese recipe. You can check out all the other recipes on the Culinary Travel Week page or by following the #culinarytravelweek hashtag on social media.

The night before
Put the chickpeas to soak in three ties their volume of water, as they will double in size. Stir in one teaspoon of baking soda, which will soften them and therefore help reduce their cooking time.

Preparation
Rinse the chickpeas under cold water, put them in a saucepan, cover with fresh water and place over medium heat. Bring to the boil, cover the pan and cook for 1 hour or until they are tender.

While the chickpeas are cooking, toast (or fry) the bread in a hot oven or under the grill until golden and leave to cool.

Melt the butter in a frying pan and sauté the pine nuts, stirring regularly, until golden brown. Remove with a slotted spoon onto paper towels and leave to drain.

Mix the crushed garlic (and mint if you chose to use it) into the yogurt, add salt to taste and set aside.

Finishing and serving
Break the toasted bread into bite-sized pieces and spread over the bottom of a deep serving dish. Drain the chickpeas and spread them over the bread. Cover with the seasoned yogurt. Garnish with the sautéed pine nuts and serve immediately. 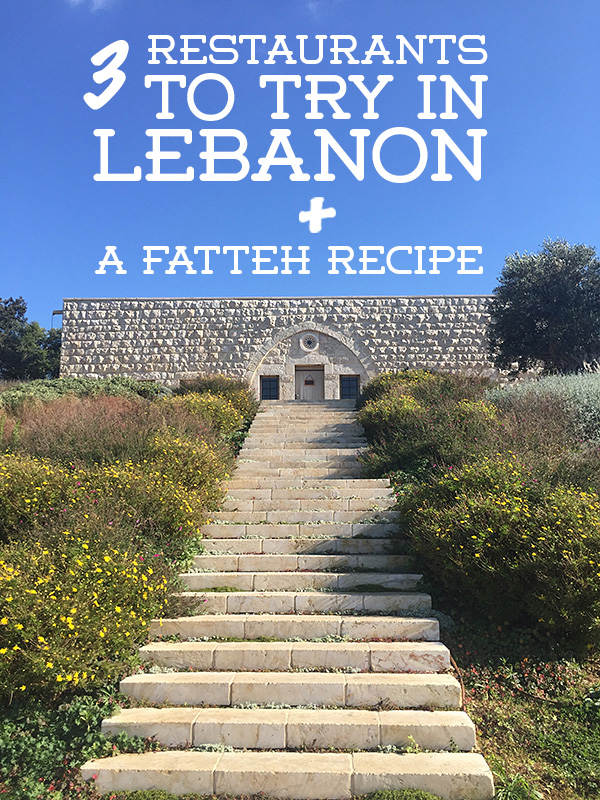 Pin it! Three great restaurant to try in Lebanon