It all started with one innocent tweet from yours truly stating that Mamie Clafoutis’s canelés were the best in the city. That got a response from Christelle stating that hers were the best and that a post on her canelés was coming soon (she has since then published it). I sensed a certain defiance in her tweet-tone 🙂 so I challenged her to a canelés taste test at the Telegraphe offices. It was supposed to be a small affair, her canelés vs Mamie’s and all of us at Telegraphe as taste testers. But, as we all know by now, there is no such thing as a small affair when it comes to foodie activities and twitter and we soon found ourselves organizing a canelés party! Andrea joined the challenged and a few pastry shops were kind enough to sponsor us with versions of their canelés (all but one which shall remain nameless). All in all, 6 different canelés were put to the test, 2 “amateurs” and 4 “professionals”.

The mission: Find the best canelés in the city!

The prize: Bragging rights and a few glory tweets from every foodie in Montreal about how good your goods taste! 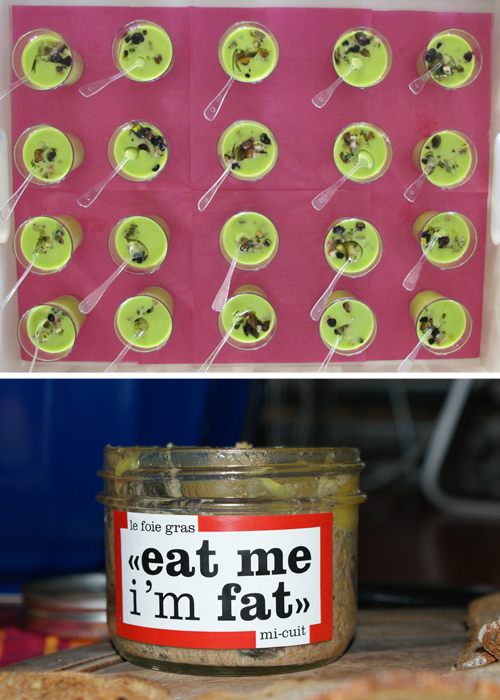 The first edition of a Telegraphe Taste Test took place on Thursday September 9, 2010! We were off to a good start with some amazing savoury goodies from Ian Perreault, including cold avocado soup with pistachios and sultanas, a variety of sandwiches, a lentil salad and smoked salmon tartare. The awesome foie gras that was there that night was the work of Tagada Bistro. The canelés were all aligned and waiting patiently for their turn. Did I mention that this was a blind tasting, so none of the guests actually knew which canelés were which, which is the only way to have a fair ruling really. After everyone was full, the taste test commenced. Everyone had to try a piece of every canelés then use their voting slips to vote for the best one. It was a close call, I myself hesitated between two that seemed like the perfect canelés to me: crunchy and caramelized on the outside and soft and custardy on the inside. The votes were then tallied and the verdict was finally out:

3rd place: Andrea (and a special mention to her for the matcha-flavoured canelés!)

Next time you’re looking for the best canelés in town, and by the way, we predict that canelés will be the next big thing and that macarons and cupcakes are now out, you know where to go. Or you can bake your own by following Christelle’s recipe here.

Dine out and do good for the 3rd annual Restaurant...